Alaska is big.   I mean it’s huge.   It’s twice the size of Texas.  On this seven-day cruise through Alaska’s Inside Passage, we would explore a mere fraction of this massive state, but what we would see was enough to fill my camera with almost 1400 photos and my mind with countless unforgettable memories.

While I expected we’d see mountains, trees, glaciers, and hopefully some animals, I had no concept of the scale, quantity, and diversity that Alaska—often called “The Last Frontier”—had to offer.

When we awoke the first morning to breaching whales on all sides of our ship, I was stunned by the beauty, grace and agility of these colossal aquatic mammals.  But really, you’d have to be a fool not to be.  They are, in the most accurate use of the word, awesome.

Moving beyond the obvious was a bit more challenging for me.  As we cruised through Icy Strait and admired the passing scenery, the running internal soundtrack of mind kept repeating, “Oh, it’s so beautiful.” Well, yeah.

But Ranger Andrew changed all that.  After our whale morning, we picked up Ranger Andrew at Bartlett Cove near the entrance to Glacier Bay.  He joined us for two days and shared his expertise about the wildlife, plant life, and geology that comprised Glacier Bay.

While I can’t remember all the names of or facts about the things we saw, I can remember one thing:  his enthusiasm.  It was contagious. I have never met anyone as excited about his job and so eager to share his wealth of knowledge as Ranger Andrew.  From birds to sea lions, from lichens to flowers, and from shale rocks to glaciers, he made everything fascinating.  He didn’t just impart information, he made the complicated simple and the simple magnificent.

At South Marble Island, we ogled several harems of sea lions lounging on rocks like celebrities on the French Riviera, surrounding their respective dominant males.  While the decibel level of these yelping beauties reached peak levels, what was even more powerful was their stench.  Even from 100 yards away, that smell was brutal.  Every now and again a sea lion would silently slink away and slip into the water and then suddenly reappear scaling another part of the rock.  We noticed several who were branded with a mark so that researchers could track them.

Some of their neighbors on South Marble Island included puffins, common murres, and various gulls.   The variety and bounty of animal life on this relatively small island was astonishing, but, as we came to expect, Ranger Andrew had the explanation. The island (composed of limestone and featuring a dense spruce forest, sloped cliffs, and grassy round hilltops) is an ideal sanctuary for all these creatures because the diverse terrain of the island offered perfect spaces for shelter, resting, hiding, and nesting.

Ranger Andrew also ran us through exercises in patience and what could possibly be used as a replacement for an eye chart test when he had us scour the mountainous face of another island to search for elusive mountain goats.  For over half an hour, every passenger with binoculars or a camera with a decent lens panned up and down and left and right, across the lines of trees, below the grey stripes in the rocks, and into every single possible nook and cranny we could find.  Ranger Andrew was, of course, the one to spot our first mountain goat, and his face just beamed when he explained to everyone where to look.  Victory was his…and ours.

When we dropped anchor near the glacier, we had the option of exploring the coastline in a small skiff, doing a relaxing beach walk, or hiking the along a craggy-faced mountainside and crossing onto a glacier. Guess which one we picked.

With Laurie (expert expedition guide) and Ranger Andrew leading us, we scrambled up and across the face of the mountain.  Despite wearing six layers on top, four layers on the bottom, a scarf and a wooly hat, I still felt the rain, the whipping wind, and the chilly 40-degree air temperature bite into my core.  Being next to an ice mass that was, at its mouth, as wide as three football fields, as tall as a thirty-story building, and was miles long intensified the chill. I was grateful to be on the move and work my body into a warmer state.  I was equally thankful that I had two walking sticks to steady my balance.  Between the slithering streams that glided down the slope, the slippery shale fragments that slid out from under us, and the jungle-gym boulders we had to clamber over, staying upright was a real challenge.

I found myself being the frequent straggler, partly because I cautiously tried to stay sure-footed, but mostly because I liked looking at all the stuff around me.  Since Ranger Andrew was acting as the caboose for our hilly scramble, it gave me a chance to ask questions and eavesdrop on the info he was sharing with my fellow inquisitive hikers. While I was initially struck by the grandness and color of the glacier on our left, the vivid bursts of the plant life along the hillside, and the countless waterflows that cascaded through every path we took, both Ranger Andrew and Laurie helped me to see the deeper beauty of the nature that surrounded us.

One hundred years ago, the slope on which we stood was completely covered by that glacier.  Since it receded, life found a way to emerge where there once was no life.  Lichens, fungi, and flowers now fight their way for survival and provide the basis for new life.  Despite the difficult conditions and terrain, they strive to thrive.  They cling to edges of rocks and reach their way across streams to proliferate, reshape and redecorate the landscape.  It’s nature triumphing over itself.

And the rocks reveal their own histories through their composition and color.  These sedimentary and metamorphic mineral and organic life composites were formed over millions of years, subjected to a geological tango of intense pressure, extreme weather conditions, erosion, and glacial movement.  While I lack any expertise to interpret their geological record, Ranger Andrew taught me that these rocks—with their streaks of orange or blue that separate layers of white or green or black or grey—invite me to recognize and appreciate the history that formed them.

The experience all came together the moment I stepped onto the glacier. I felt the world fall silent and still, and all at once, I felt small and grand.  I understood that the force of nature that created and maintains this glacier is the same that shaped the adjacent mountains, fosters the life that blooms on the rocks, nourishes and shelters the wildlife of this region and sustains and produces life everywhere.  In geological time, everything was churning…living and dying, then living again. I realized that I am a part of that.  I am connected to this, even if time and distance separate me from it.  We are all a part of it.

Perhaps I already knew all of this on an intellectual level before.  But thanks to the Ranger Andrew (and Laurie), I’m gaining a deeper understanding of that. Experiencing nature, not on a screen or in a book, but in the shadow of a thundering glacier with the bite of the Alaskan wind in my face, I have connected with my world like I didn’t know was possible.   And I can’t wait to see what’s next.

Check out these exciting detail shots of the glacier. 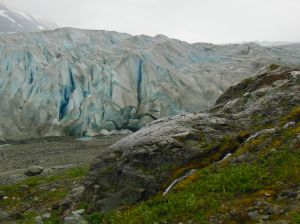