One of my favorite “side gigs” as a Rick Steves’ guide is promoting our tours at the Travel & Adventure Show every winter. This 2-day event happens in a different major city almost every weekend from January to March. Thousands flock to the city’s convention center, which is jammed aisle after aisle with travel booths featuring everything from photo safari trips in Kenya to South American rainforest getaways and quaint East Coast B&Bs to pickpocket-proof pants. The energy is palpable and buzzes with electrified dreams of travel.

When Rick’s the featured speaker (usually giving his European Travel Skills talk to more than 800 of those attendees), we have a Rick Steves’ Europe booth, where my colleagues and I engage with people one-on-one, answering questions about our 45 different European itineraries, independent travel using our guidebooks, and European travel in general. It’s thrilling to hear about people’s previous travel experiences and plans for future journeys. And it’s fun to get to know the people of the city we’re working in. Next month I’ll be at the L.A. event, and in March I’ll work at the Bay Area show.

This past weekend marked my fifth time working the Chicago show, but despite annual visits to the Windy City, I never get to explore the city: it’s fly in Friday night, work all day Saturday, work all day Sunday, and fly back to Seattle to (fingers crossed) be in my own bed by midnight. The same’s true for Rick, of course—whether working at a travel show or a doing pledge drive for Public Television, he rarely gets to be a tourist in the city he’s visiting. It’s just work, work, work. So this year, Rick and I decided to extend our stay in Chicago to celebrate his daughter Jackie’s birthday (she teaches at a Catholic all-girls school in the city) and to finally get to know this Midwest metropolis.

As a modern, with-it urbanite, Jackie knows such interesting places to eat and cool things to do in town. On Sunday night we popped into Dawali, a cozy Middle Eastern eatery, for some light but tasty fare (we were still detoxing from our previous night’s gut bombs from a foodie burger mecca that shall remain nameless here). Then we took in some comedy at the iO (Improv Olympic) Theater, where legendary comedians like Chris Farley, Amy Poehler, Tina Fey, and Mike Myers got their start. With a combo of seasoned veterans of the venue and comedy newbies, there was a combo of some funny hits and flat-line misses, but we were impressed by the guts and wits of everyone on stage.

Monday morning, while Jackie was at work, Rick and I met up with our friend and colleague Amanda Scotese, an RS guide in Italy and founder of Chicago Detours. We hopped on her Chicago Architectural tour to discover intimate secrets and the complicated past of the historical downtown area called The Loop.

The tour lasted about two hours, staying within a ½ mile radius of the Chase building, and every moment was filled with engaging tales, impressive structures, and mesmerizing design and décor. Amanda expertly incorporated historic photos and useful videos on iPads (I got to be one of three iPad operators for our group of 11) that truly enhanced our learning.

You could hardly walk 20 yards without seeing something historical, cultural, or political. I’m accustomed to seeing that kind of side-by-side and layer-upon-layer visual chronicle in Europe, but to experience that in such a relatively young city as Chicago was surprising and intriguing to me. It made me want to learn more about this vibrant place and come back for more. From the monumental to the intimate, I was thankful that Amanda was a thoughtful and methodical curator of sights and information so that we could get a profound yet not overwhelming look at Chi-Town.

We finished the tour under the Tiffany glass dome of the Chicago Cultural Center, former home to the Chicago Public Library, Central Building. Amanda asked each of us to reflect on what struck us the most during the tour. Every tour member had a different response: learning how the city smartly uses the vast network of underground pedways to relieve sidewalk congestion above ground and to provide commercial space, seeing how civic-sponsored—and formerly controversial—art by Pablo Picasso could help revitalize what was once a depressed part of town, learning how the department store Marshall Field’s and its forward-thinking, eponymous owner were instrumental in shaping American society in the early 1880s by being the first to employ women rather than men as sales clerks, and realizing how architecture (both on the exterior and interior) can be designed to elicit particular emotions and even behaviors of the people who engage in the space. Two hours on the right tour with the right guide in Chicago can teach you so much.

With three hours before Jackie’s birthday dinner, Rick and I strolled through Millennium Park, had photo-ops at The Bean, and ventured through the vast and elegantly designed Chicago Art Institute. Ever since watching Ferris Bueller’s Day Off in 1986 (OMG, was that 30 years ago already?), I’ve longed for a chance to come to this world-class museum. Its well laid out collection spans continents, centuries, styles, and forms that let you behold and immerse yourself in the artistic history of the world. 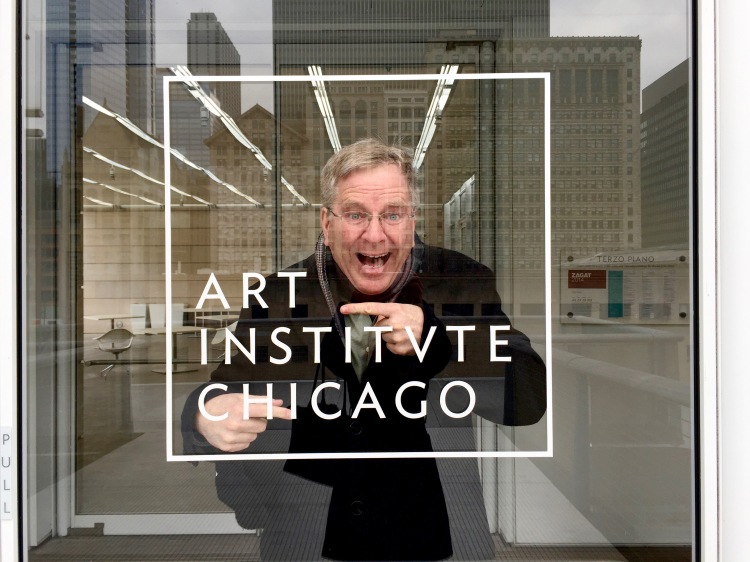 To finally be inches from Marc Chagall’s America Windows, Georges Seurat’s A Sunday Afternoon on the Island of La Grande Jatte, Grant Wood’s American Gothic, and Nighthawks by Andrew Hopper—let alone the countless other works by Pablo Picasso, Joan Mirò, René Magritte, Mary Cassatt, Claude Monet—made me unexpectedly emotional. I tried to keep my cool around Rick, but my brain and my heart were doing tandem flip-flops for these truly iconic artists and their creations. And in between the big name oohs and ahhs, small name (and even no name) works from ancient times to recent times wowed us both.

We met up with Jackie for birthday sushi at Momotaro—replete with Japanese candy confetti pocky sticks and a birthday candle—but the real highlight for all three of us was Guthrie’s Tavern. 80s music played softly in the background, the tables were filled with hipsters and  other cool kids who didn’t try as hard to look cool, and a floor-to-ceiling bookcase offered a plethora of board games to entertain us and test our smarts. There were so many options from old classics like Monopoly, Risk, and Trivial Pursuit to newer party games like Wikipedia (yes, they have a game), Buzzword, and Go Mental. Cards Against Humanity went really well with our beers, and by the time we got to Scattergories, our brains were feeling fancy free, if a bit foggy.

Since it was a school (work) night for Jackie, we called it quits by 10:30, but not before capping the night with waffle cone ice creams at Jeni’s—the perfect way to round off Jackie’s birthday and our visit to charming Chicago.

8 thoughts on “Chicago: Travel Shows, Tours, and a Birthday”